MAP OF THE BEDFORD FALLS MODEL 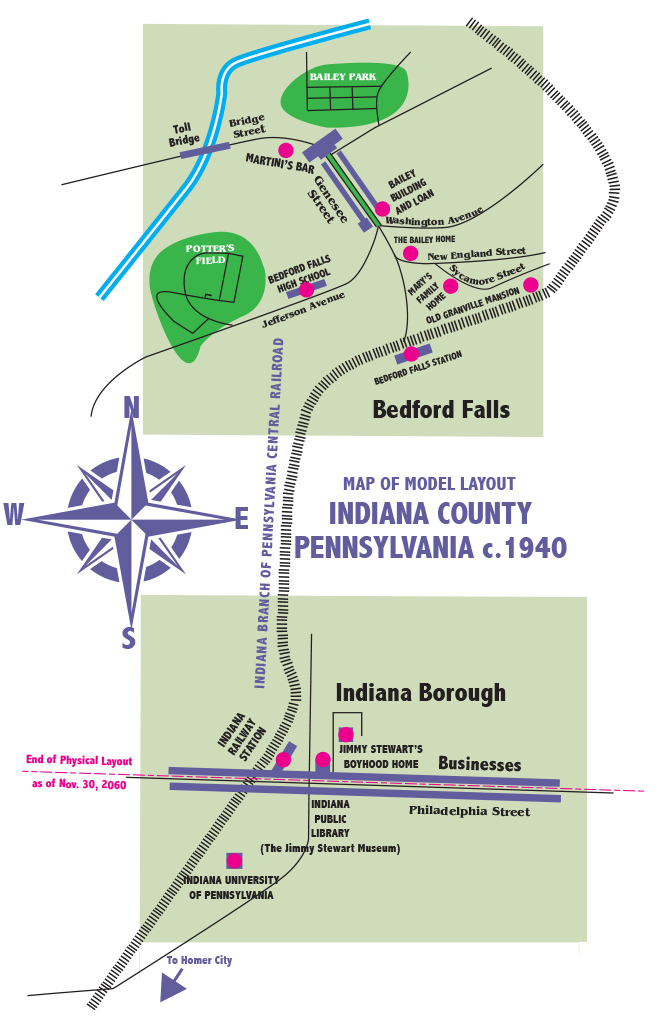 It’s a Wonderful Life was filmed at RKO Radio Pictures Studios in Culver City, California, and at the 89 acre RKO movie ranch in Encino. The fictional town of Bedford Falls was adapted from the original set for the 1931 epic film Cimarron. The town consisted of a main street stretching 300 yards with 75 stores and buildings and a residential neighborhood.
Capra built a working bank set, added a tree-lined center parkway, and planted 20 full grown oak trees to existing sets for It's a Wonderful Life. Pigeons, cats, and dogs were allowed to roam the mammoth set to give the town a lived-in feel. Due to the requirement to film during different seasons, the set had to be extremely adaptable. RKO even created “chemical snow” in order to avoid the need for dubbed dialogue when actors walked across an earlier type of movie snow created from crushed cornflakes.
Filming started on April 15, 1946 and ended on July 27, 1946, exactly on deadline for the 90-day principal photography schedule.
RKO's movie ranch included most of “Bedford Falls” was razed in 1954. Only two locations from the film have survived: the swimming pool that was unveiled during the famous dance scene, where George courts Mary, is still in operation in the gymnasium at Beverly Hills High School. where it was built in 1939; the second is the Martini home, located in La Cañada Flintridge, California.
Home
Subscribe to: Posts (Atom) 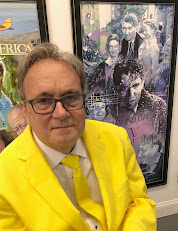 George Rothacker is a celebrated artist, filmmaker and designer who shares a long history with the Jimmy Stewart Museum, In 2002, he painted “First Snowfall,” a canvas and print edition featuring “It’s a Wonderful Life” on the marquee of the Indiana Theater. Over the years, his collaboration with the Museum has produced, among other things, the biographic documentary of Stewart: “Always Be Nice to People.” George and his wife, Barbara, live in Villanova, Pennsylvania and are parents to four children and grandparents to eight. George’s daughter, Noelle, graduated from Indiana University of Pennsylvania in 2002, and now lives with her family in the community of Penn Run, a short drive from the Stewart Museum.

11" x 17" signed by the artist, George Rothacker, with a liquid ink pen 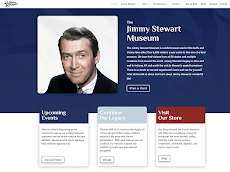 Purchase films, gifts and learn about Jimmy Stewart and the museum

Where is Bedford Falls?

A vehicle passes over the steel truss bridge Dec. 8, 2006, in Seneca Falls. For years, civic boosters have pointed out intriguing parallels that suggest Seneca Falls was the inspiration for Bedford Falls, the make-believe mill town in “It’s a Wonderful Life.”